E-Resident Rosen Dimov: “1Office Brings Together E-residents in Tartu: What is Being an Entrepreneur All About?”

E-Resident Rosen Dimov: “1Office Brings Together E-residents in Tartu: What is Being an Entrepreneur All About?”

E-Resident Rosen Dimov who we met up during the sTARTu Day 2022 was kind enough to put together a nice summary and share his experience about e-Residency, 1Office and the event itself. Here it is:

“The last days of August this year gathered thousands of entrepreneurs and investors in Estonia for the sTARTUp Day. As the title of the event suggests, this summit did not take place in the capital, but in the city of Tartu.

Among the participants there were many who have already become e-residents. However, I am sure that many have already applied for the e-residency after learning about it at the event and meeting those who have already become e-residents and were there to inspire them with their stories. This applies to me and many other friends that I spotted at the sTARTUp Day, or that we organised our attendance of the event together. While many e-residents were split in the concurrently happening workshops, speeches, demos, etc, naturally e-residents gathered in the common areas (such as the food corner or the lounges), and of course, parties. Yes, indeed: being an e-resident is not only about taking business seriously, but also about dedication in social life. Many informal contacts are created and nurtured exactly at moments when everyone is relaxed, dancing, singing or…doing whatever is entertaining for them, out of the official agenda 🙂 .

As many could give their personal impressions about the sTARTUp Day, you could judge my level of satisfaction by telling that I already got my tickets and flights for the upcoming edition in March 2023 (chance for you to go to their website and check the exact dates). However, what is more important is that many e-residents attending were satisfied customers of 1Office. As a Board member and former Vice President of EERICA, the e-residents chamber, I acknowledged our organisation’s outstanding cooperation with 1Office, which has been our service provider partners for years. Having this common service provider was also a way to start the conversation and then plan more cooperation with fellow e-residents joining the sTARTUp day.

However, some of us managed to get an insight into the role that Tartu has played historically to eventually become the host of international summits such as sTARTUp Days. Thanks to Tõnis Jõgeva, Director of Sales at 1Office, we had a unique tour around the city, learning about its special heritage and conditions that have formed to make it suitable for Estonian and foreign entrepreneurs to not only meet for an event there, but also to run their business there. Hint: there are a good number of coworking places in the city, a very strong university as a source of talent and knowledge for innovative startups, and a tightly knit entrepreneurial ecosystem. Tõnis also enlightened us about his personal journey, how growing up in Tartu in the post-Soviet times shapes the mindset of someone that becomes so passionate about e-Residency to work for a service provider company. It was a very powerful tour led by an out-of-the box tourist guide, which continued with some drinks and local cheese.

Just when we were planning to call it a night, a bunch of unknown Ukrainian attendants of the event approached us with a request to take a photo with them and the Ukrainian flag together. ”Slava Ukraini” was the immediate response and then our photo session (and super viral Instagram shot – go and find it) became the beginning of a beautiful friendship to unfold – it is not only about business, right? 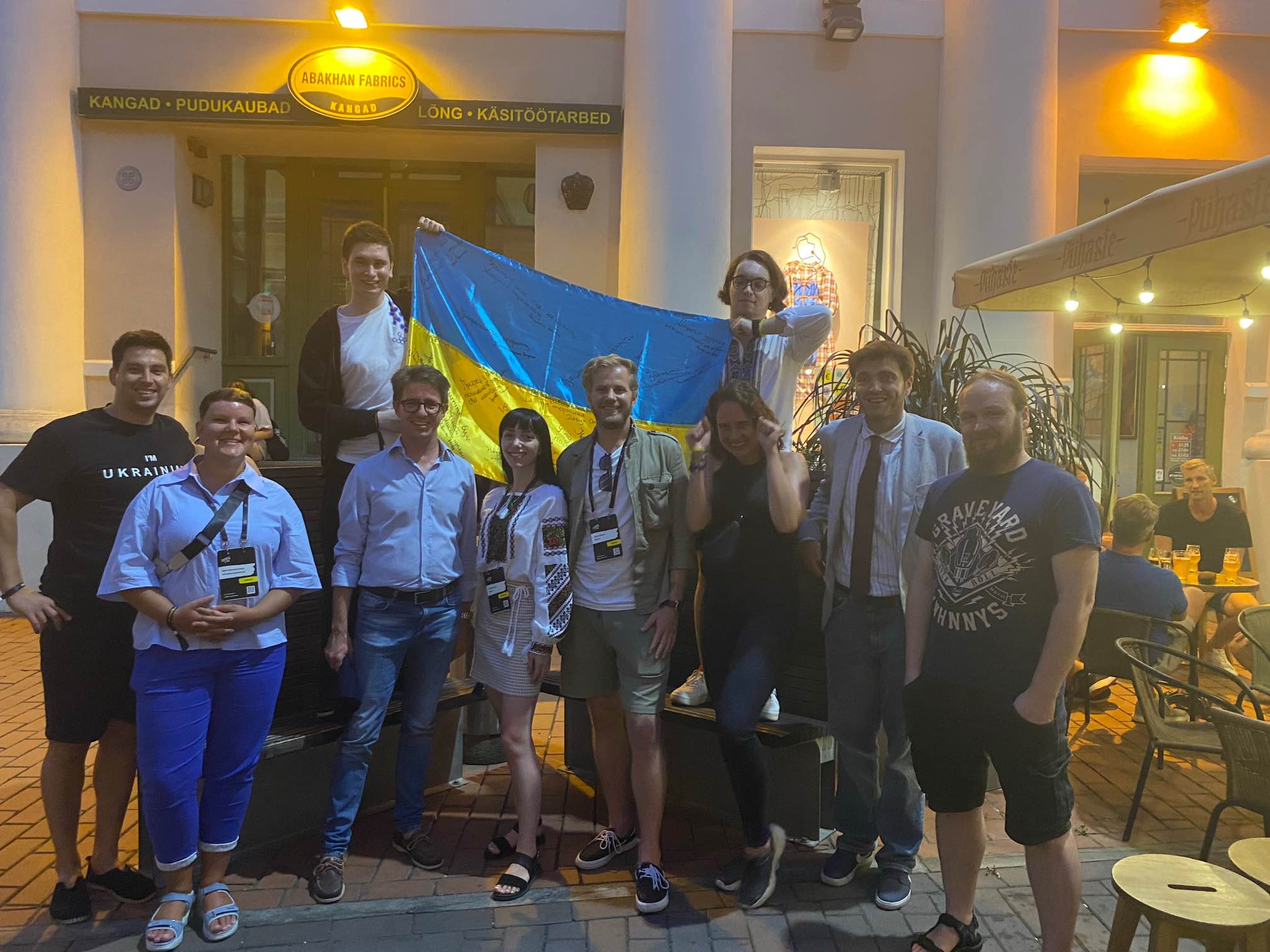 While our new Ukrainian friends had come particularly for the sTARTUp Day, we met many more Ukrainians who had joined the event as residents or e-residents of Estonia. They all recognised the opportunity that the country provides for them to continue their lives, careers or businesses. Some hoped that the war would soon be over and they would be able to come back to their friends and family, whereas others were making plans to settle in Estonia. The conversations with them always provoked mixed feelings in me: I still have remorse that many of us, living in the bliss of the indulged non-Ukrainian world, did not exercise our citizenship rights and other democratic mechanisms against our governments and international organisations to prevent the war, or at least give a more categorical response to it.

Lastly, I would like to finish with something that normally you would not hear in the official programme of events such as sTARTUp Day. Mostly entrepreneurship is advertised with its positive aspects, but the side effects are not given so much attention. Having started five startups (two of them in Estonia, another one coming up – again in Estonia !), I was impressed to hear the story of a person that I met while queuing for a hamburger in the common area outside the concert hall of the sTARTUp Day’s opening party. He was running a successful business that he started from scratch, when he found that he had cancer. Most likely the stress of building a huge business caused the illness. He kept delaying the treatment until it got really obvious that he was sick and dying. Conventional medicine was no longer able to help and he went around the world in quest for alternative treatment. He deserved a life-saving and life-transforming healing after having served a hospital for poor people in Nepal, completely voluntary. His compassion for the poor that were much worse than him in terms of health and material conditions, combined with the guided meditation and spiritual sessions with Buddhist monks, allowed him to get to the point when he knew that the cancer was starting to disappear. He found out that he was putting all his energy into the startup and it has become the meaning of his life because he was seeking recognition from others. Knowing others that got very sick in their entrepreneurial journeys, and admitting that I have been through many emotional and psychological health issues in doing my startup things, I can relate myself much to this story. No matter how fancy entrepreneurship, e-residency, building a future-unicorn startup may sound from the surface, dive deep and try to understand what really drives you doing this business, and what really matters in your life. Do not disconnect yourselves from family and friends, who could help you get ‘reality checks’ and wake you up before it is too late…

With best memories from Tartu,