Experience Story Part 2 – In Madeira as a Digital Nomad

Experience Story Part 2 – In Madeira as a Digital Nomad

In my daily work, I help freelancers, digital nomads, and e-commerce businesses to start a company abroad in the simplest way possible. 1Office is made for making business simple – as we say. And we really do it – helping to save on costs, bureaucracy, paperwork, and accounting and cooperate with e-Estonia and e-residency of Estonia.

Recently I heard from our cooperation partner and Estonian e-resident Cristoph that Madeira is heaven for Digital Nomads. So it sounded like a great plan to pack my luggage and take a week to live that life – on an island I did not know much about; however, Portugal has always had a place in my heart anyway.

I had a fantastic week in Madeira and need to agree: an amazing place for being a Digital Nomad and enjoying life! During the trip, there was so much happening, so I wanted to share my experience as a digital nomad in Madeira – in case you have questions about the island, contacts, or doing business abroad, do not hesitate but reach me out: tonis.jogeva@1office.co

Here is Part 2 of my adventures in Madeira! If you haven’t yet, have a look at the Part 1 as well!

Not much to say about this day, other than hiking and hills are the reasons to come to Madeira. We took the two-peak hike from the 3rd highest point to the 1st highest point (1861m) in Madeira and back. The whole endeavor took around 5 hours and 16 km, it is considered a challenging hike, but it is doable for everyone.

Many older people were on the road, plenty of spaces to stop and rest. So many beautiful views, fresh air, blue sky, and tunnels along the way – everything was perfect. You could see 360 around you and no cloud cover at all. People taking this track before said they have never seen better conditions. Before going back to the road, we also had a break and drank some local products. 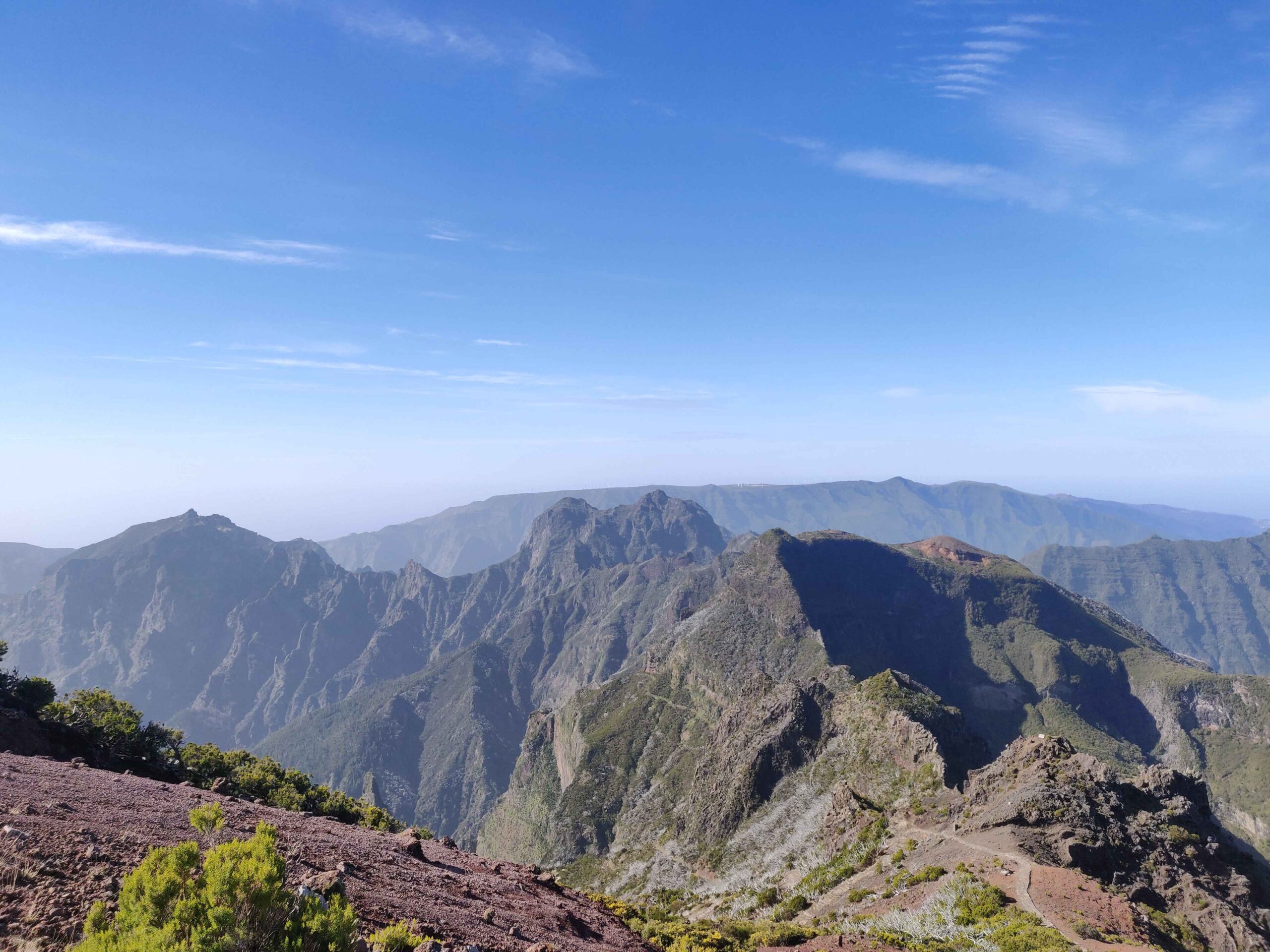 We were, of course, after Poncha, but they were out of it. I never really got an answer to how they supply that bar up there as there are no roads. Anyway, I drank Sherry and Madeiran wine instead. Those were super sweet drinks, so it was not my taste ultimately. However, supposedly Madeiran Wine was raised as toast after signing the US declaration of independence, so I was still happy.

We were exhausted and hungry, so again FOOD. We went to a place just outside Ponto del Sol. There were quite a few of us, Christoph and Olga, Tomas and Paulina, and our new Scottish friends Mary and Lochi, who randomly looked for travel companions for the hike, and we were happy to offer the company.

It seems to be the Madeiran way or more like a digital nomad/freelance way, to include everyone you do not know. The food was a mixture of different grilled meats, and we got stuffed. When the bill was due, I was amazed to see that I paid just 14 €, including beers and tips.

Day #6 – Madeira: the Place where Christiano Ronaldo was born

The only thing that I looked up before going to Madeira was if there happens to be a local football match during my stay. It is still the birthplace of Christiano Ronaldo, and I figured football must be popular there. And it is again an excellent way to see a different angle to the island.

Before the game, we visited the local farmers market; Sunday is the only working day. I got local stuff, mainly fruits, to take home with me. 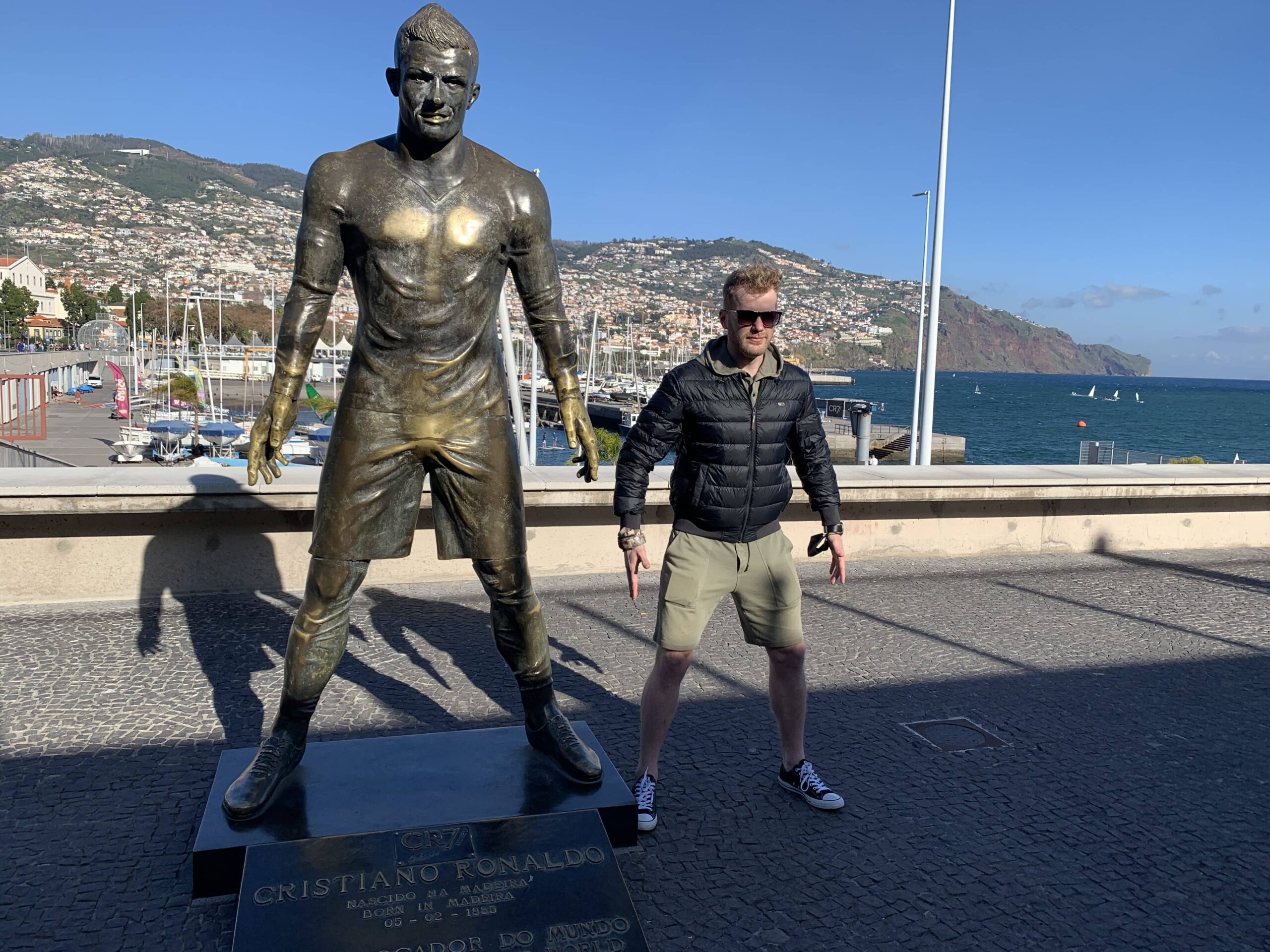 Hitchhikers at Our Home

We saw a couple of hitchhikers at a gas station on the way back. It took us 10 seconds to realise that they were probably going to Funchal, where we would be later to see the game, so we picked them up. They joined us for a 30-minute visit to the home, where we served breakfast to an Italian-German Irina and Italian Luca. Lovely people who just traveled the island also offered them Estonian candies. Again, such a sweet and non-Estonian morning with complete strangers. We then started to hurry and drove to Funchal as the game started already at 11:00 in the morning. Said our farewells to the Italian couple as well.

The game was between local National and mainland team Lisbon Benfica B. The away team won 3-0, but the thrill was there. Locals did not like the referee at all, and I probably heard a lot of Portuguese swearing. Later I got football socks from the team store as they match with my Sunday league team’s colour exactly, yes I play football myself as well, and it was a while since I last saw a professional football match.

After the match, we went to a local pastry that a local Portuguese lady Elizabeth recommended to us. We ended up talking for at least 2 hours about everything, and of course, Christoph and I talked a lot about e-residency.

We went home and visited a local store for groceries. That night, Sunday night, we home-cooked, as we bought some local fish and made fish covered with a salt crust, baked in the oven. The white fish was perfectly cooked and so juicy due to the crust. As a side dish, we had Brussel sprouts with roasted almonds. I think it was the first night I got to bed before 11.

It was Monday, so it was always busy and had lots to do. The weather was cloudy for the first time during my stay, and it seemed it would be about to rain. Therefore, I stayed at home longer than usual and caught up with my work. Around 14:00, we left for the event at Funchal.

We picked up a Polish girl called Joanna who wanted to participate in the event anyway. Madeira has an active digital nomad slack community – that is where we learned about Joanna. And that is a perfect place to catch the activities and share the contact and knowledge.

The event was at the Next Hotel in Funchal, and we arrived around 3:00 pm, so I had 2 hours to spend. Since I managed to do all of my work in the morning, I took the liberty to go shopping, so I would have some stuff to distribute around the office and for my friends and family once I am back home. Joanna joined me, and we had great conversations. Unfortunately, the shopping did not go so well; I am a lousy tourist and did not buy anything, so I decided to do it later.

The event was cozy and personal since the group was small enough to form a friendly chat.

I did manage to share my ideas and talk about the opportunities 1Office can offer. It was not only about e-residency and Estonia and showed the experience of 1Office in other countries, plus informing that we are opening service in Ireland in Q2.

I shared all my candies and goodies during this event and later got replies via email, Facebook, and LinkedIn. Christoph did not feel well after the event and went to sleep once we got home. 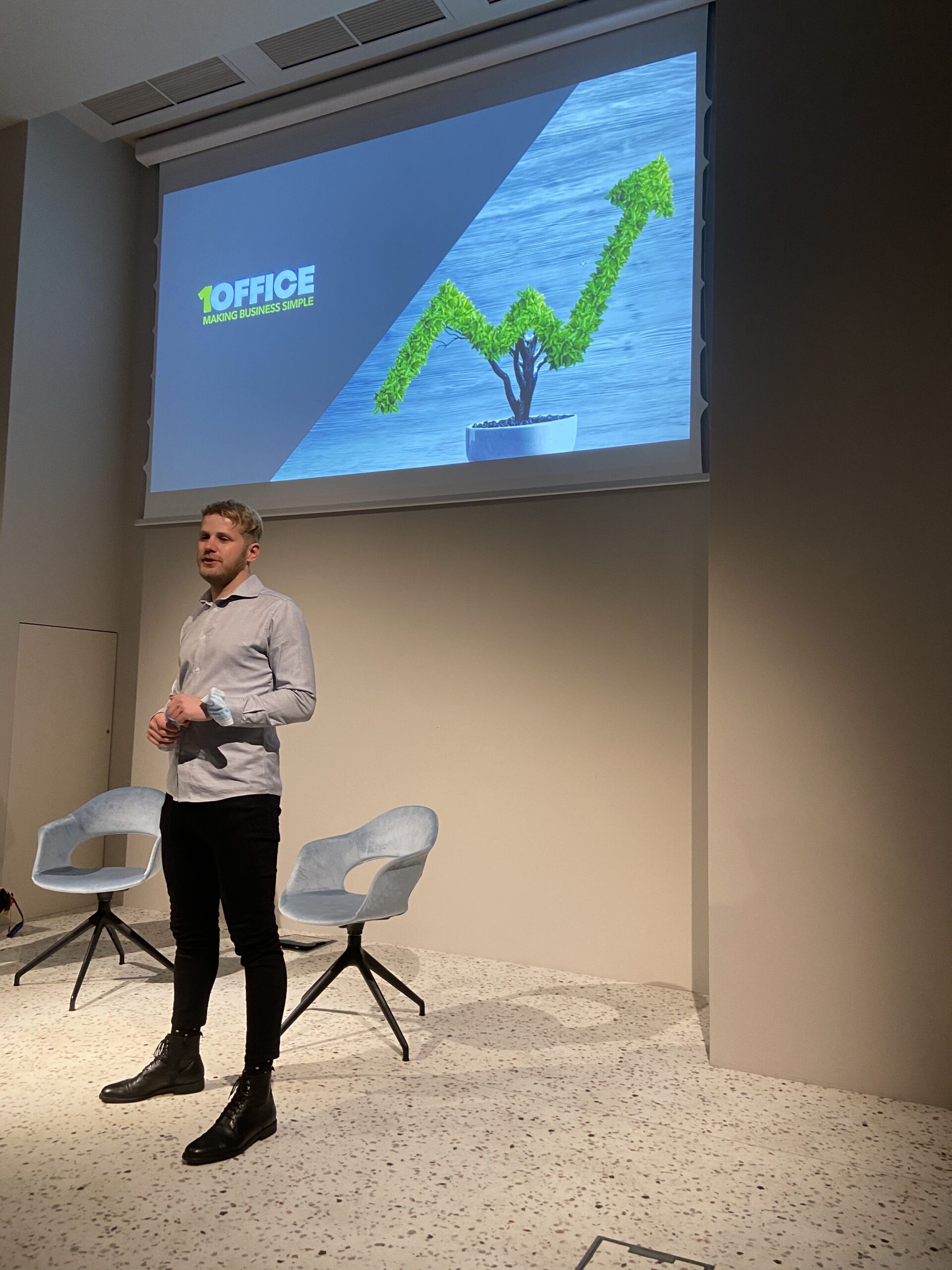 For Olga and me, the day was not over. As it was my last night in Madeira, we decided to ask Tomas and Paulina to a Poncha bar. The same one we visited the first night. Unfortunately, the bar was closed due to rain and a lack of people. Luckily, there were two other bars just 100m up the hill; one of them was open. It seems that it is family operated, and they welcomed us in. The rain was heavy, as was the Poncha Rum strong. We did not stay long, perhaps for an hour, but it was an exciting hour where I heard Polish perspectives on their government and the crisis at the Polish-Belorussian border. This is what I love the most about meeting new people – all new views and ideas.

Tomas did not drink and came with a car, which was a piece of luck for me since the rain was heavy, and walking back for 15 minutes would have been terrible. I said my farewells to the Polish couple, wondering if I would ever see them again. But the world is small – this is what the Nomad life has shown me.

My last morning in Madeira started with some minor work. I knew that I had the whole flight plus the whole night at Helsinki airport to work, so I focused more on souvenirs. Again, I am a crappy tourist, so I took an easy way out. Estonians love alcohol; my suitcase was empty after sharing all the candy I brought with me, so why not fill the luggage with alcohol? Thought, done! I bought a lot of Portuguese wine but avoided Madeiran wine, too sweet for me. But I also got 6 anos Rum.

Due to all the bottles, I was pretty worried about the weight of my suitcase. Once at the Airport at baggage drop, it was 23 kg, which was the allowed weight of my luggage. Great success!

Back in the North. #WinterIsHere

After 5,5 hours of flight, I arrived in Finland, Helsinki, where I had to stay overnight; the flight to Tallinn was 5:45 am in the morning. I did not sleep at all. Instead, I did some work and checked out some exciting articles and videos. It was an excellent time since I can not recall the last time I just surfed the web.

At Tallinn, I quickly visited the office to drop off biscuits that I bought for my dear colleagues. I was not planning to come to work that day as I was exhausted from the lack of sleep but still showed up later. This is what a Nomad would do – work after all nighter!

In case you have questions about the island, contacts, or doing business abroad, do not hesitate but reach me out: tonis.jogeva@1office.co